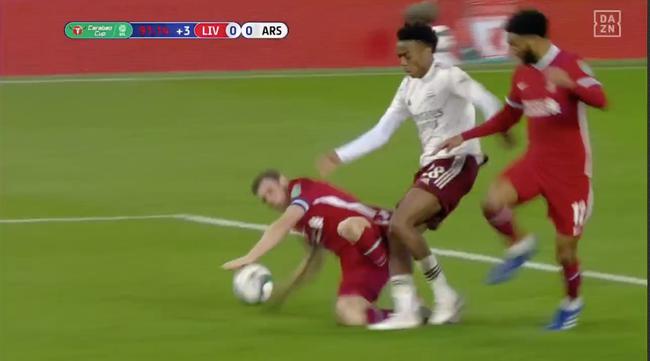 Arsenal played against Liverpool in the League Cup. At the last moment, Liverpool defender Milner fell into a penalty controversy.

The match went to the 92nd minute of injury time and Willock crossed into the penalty area against offside. At this time, Liverpool defender Milner caught up from behind and stretched out to steal the ball. Milner lost his balance and fell forward.

Just as he fell, Milner's left hand was pressed on the ball, and then it bounced on his elbow. The ball decelerated completely, and Gomez also took the opportunity to stoke the ball away after Liverpool, dissolving Arsenal's offensive.

Regarding Milner's action, the referee on duty did not say anything. In the end, the two sides continued the 0-0 score until the end, and the winner was decided through a penalty kick.

According to the rules set by the International Football Association Council IFAB, when the ball bounces from the head or body to the hand/arm, it is not considered a handball foul; when the player falls, the hand/arm is supported between the body and the ground Physically, it is not counted as handball.

During Milner's handball, the ball was first intercepted by Milner and then rolled forward. However, whether Milner's intention to extend his arm is to "support the body" or "reach out for the ball", it is a matter of opinion.